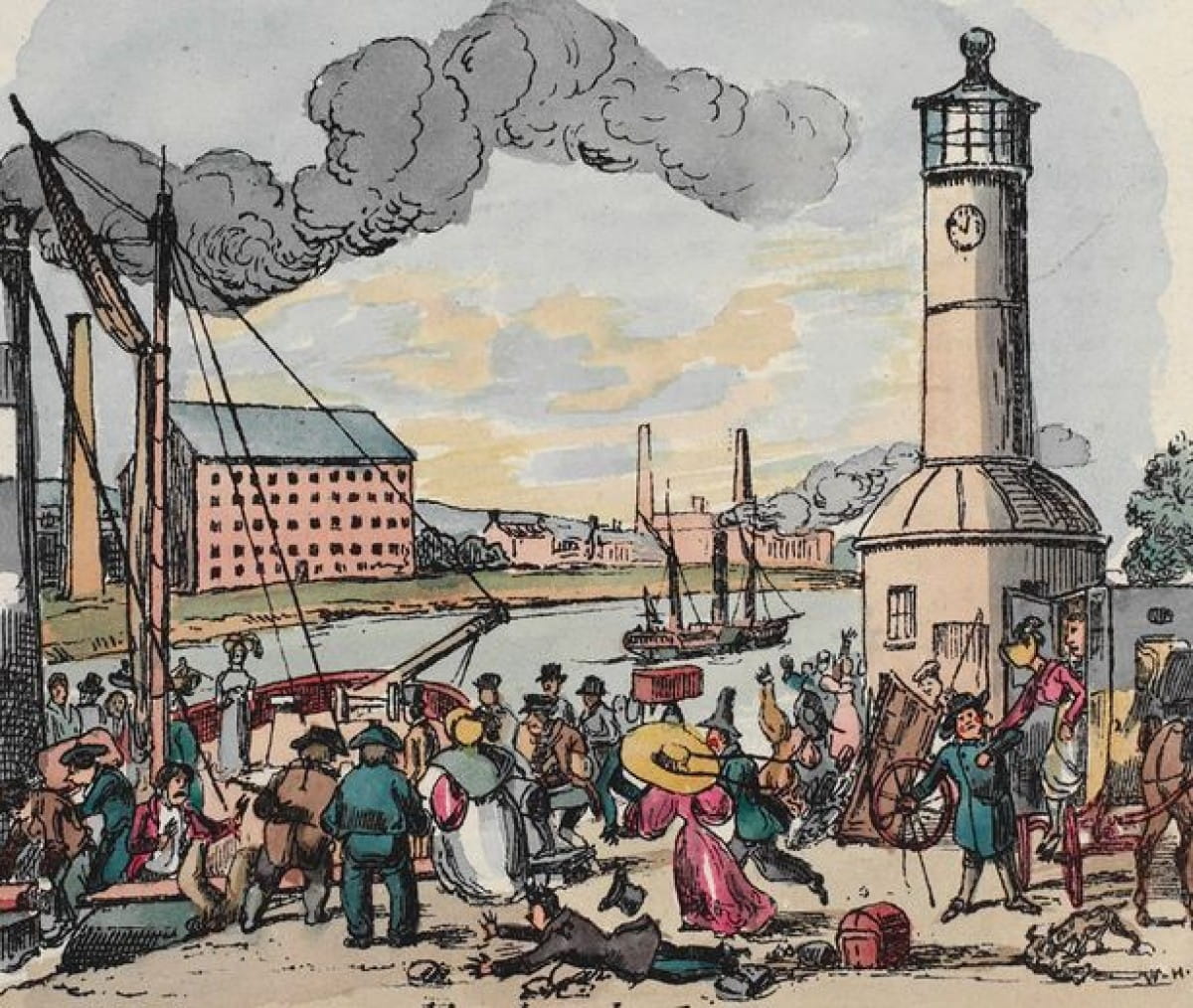 A flash of inspiration

May 913
The Broomielaw Lighthouse, as seen in The Glasgow Looking Glass (Glasgow City Archives) 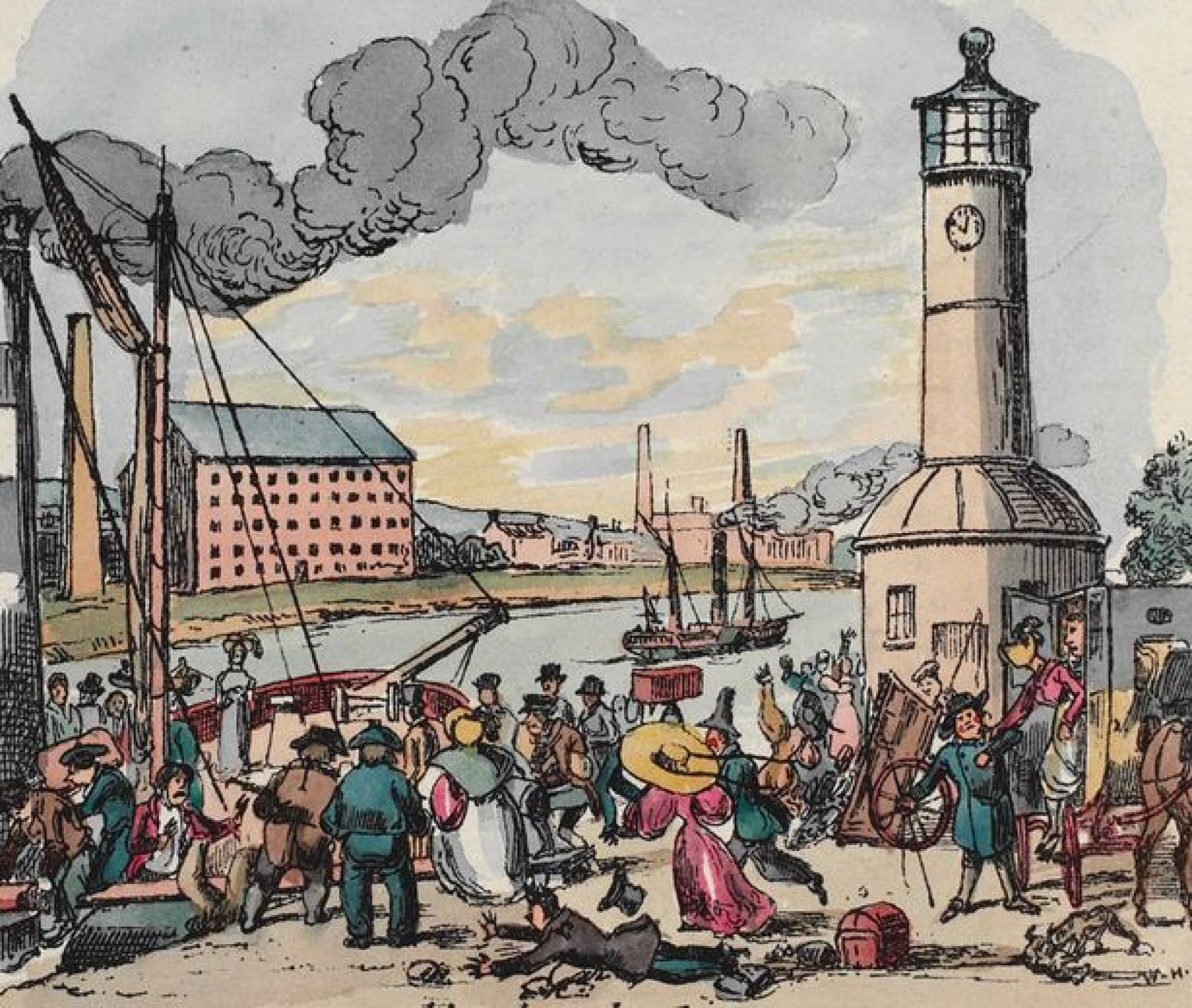 It's strange to think that Glasgow once boasted a lighthouse on the Broomielaw, but it did.

Located at the foot of Hydepark Street, on what was then the south end of the steamboat quay, Broomielaw Lighthouse was described as a "small but neat" cast iron lighthouse, and may have been cast in the foundry which operated in Saracen Street, in the Calton, behind the old Saracen Head Inn.

We certainly know that the later Saracen Foundry, in Possilpark, sent self-assembly, precast iron lighthouses all over the world.

And why shouldn't we - author Robert Louis Stevenson's father and grandfather were among the most accomplished and renowned lighthouse builders in the world. Long before the Treasure Island author put pen to paper, the family was known as the 'Lighthouse Stevensons'.

Lumsden & Son's Steamboat Companion from 1839 records that the lighthouse was constructed in the spring of 1824 following the extension of Broomielaw Quay a year earlier (necessitated by Glasgow's increasing maritime trade), and featured a clock with faces pointing facing east and west, so they could be viewed by ships coming up or going down the river.

Lit by gas, it served the city at a time when the Broomielaw was at its beating heart, the main passenger and cargo quay linking Glasgow to the world.

Back then, the river was still so shallow that big sailing ships had to moor down at Greenock or Port Glasgow, and were served with a flotilla of the new, fangled steam side-wheelers, which, with their shallower draft, would race up and down the river with both human and trade cargoes.

The New Seaman's Guide and Coaster's Companion of February 1847 details how the lighthouse was built to afford light upon the quay and prevent vessels (especially steamboats) from coming against the river's edge while approaching the harbour at night.

The Magazine of Science from 1847 also mentions the lighthouse, in charting how, since, January 1 of 1844, 'a brilliant light' had been shone from it onto the Broomielaw.

The lighthouse didn't have that long a life in Glasgow. In 1847, as quayside lighting improved, the Clyde trustees sold it off for for £33, about £4,200 in today's money) to a gentleman who intended to dismantle it and re-erect it in South America.

I like to imagine that, somewhere on that continent, it is still guiding seamen to a safe harbour.

This coloured lithographic cartoon of the lighthouse comes from the second issue of The Glasgow Looking Glass, published on June 25 1825. Regarded as the world's first comic book, this was the first in a series of six images under the title 'Shipping News', illustrating the hazards of a sea voyage from Glasgow to Liverpool.

The passengers are all dashing to catch a steamboat to Greenock, where they would board a bigger sailing ship to continue their voyage south.

And, with this being Glasgow, all life is there; a posh woman in a fancy hat; and unwary traveller, tripping over someone's luggage; and two daft dugs, having a tussle in the dust.

The large building on the south side of the river, at today's Springfield Quay, belonged to William Scott & Co, and was Glasgow's first steam-powered cotton mill.

I'll be telling this story, along with more tales of the riverbank, later this month at the Clydeside Distillery. The first night sold out so quickly that we've added a second date, on Thursday May 30.

More about broomielawMore about glasgow looking glassMore about river clyde