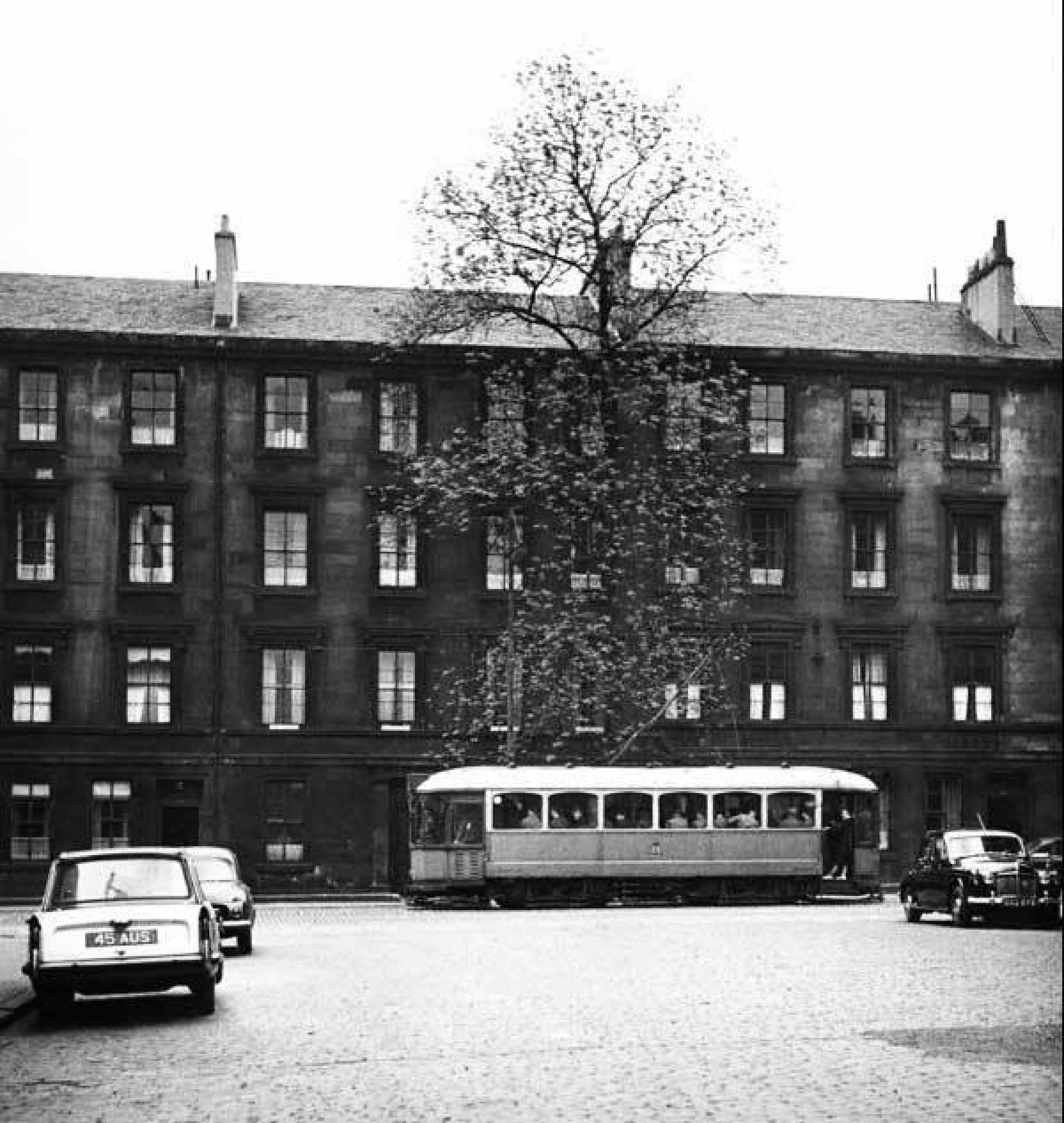 The lone Ash tree in Argyle Street, opposite the Park Bar, has cast its shadow over the city for over 150 years,

This picture, taken around 1960, shows the tree with a one-off, high-speed, single-decker tram, introduced by the city's then transport convener, Baillie Burt. Because the tram had nothing up top, it was nicknamed 'Wee Baldie'.

The story below, taken from James Cowan's 1935 book, From Glasgow's Treasure Chest, explains the roots of the Argyle Street tree.

'At the west end of Argyle Street there is a four – storeyed tenement known as Franklin Terrace, which has a narrow strip of garden ground in front of it. About the middle of the tenement at No.1223 Argyle Street, there stands a very tall Ash tree, its highest branches reaching far above the top windows of the tenement.

This tree is unusually graceful for an Ash, its slender trunk almost being as straight as a ships mast; and there are no heavy side branches to spoil its symmetry. This slenderness is no doubt owing to the shaded position causing the tree to stretch up to the light. It is quite the most graceful Ash I have seen.

Vague sentimental stories are always apt to grow up around any interesting object of which the exact origin is not known, and I found this tree to be no exception; but in conversation with friend I learned exactly how it came to be there.

A friend of his used to live in the house in front of which the tree stands. A member of this friend’s family brought home some primrose roots from the place he had been on holiday, and set them out in the plot. The earth around one of those roots must have continued the Ash tree seed, and when the sapling came up it was allowed to remain. That story may not be so sentimentally interesting as one or two others which exist about the tree, but it has the merit of being the true one.

Not very long ago an adventurous cat made its way up the branches of this tree on a level with the rones of the tenement, and then found it could not come down again. For nearly two days it remained there, mewing piteously, until a telephone message was sent for the fire brigade to come and rescue it.

At first the Fire Brigade authorities demurred at being called upon for such a purpose, but at last it was recognised that nothing short of a fire escape would meet the case, and the very latest and longest was sent out. An exciting 20 minutes then ensued, during which long lines of traffic were held up, east and west, and at last pussy was rescued, to the great satisfaction of the cheering crowd who looked on.

As Franklin Terrace was built about 1850 (it appears for the first time in the Glasgow directory of 1851) and my informant could himself remember the tree in question as a quite large one in 1877, it is probable that its seed was set only a few years after the erection of the tenement.

I estimate its height at about 75 feet, and if its age be taken at the same number of years, I think that will not be far from correct. It looks healthy enough to last for another 75 years, if allowed to remain, as I hope it will.'

More about argyle streetMore about franklin terraceMore about james cowan