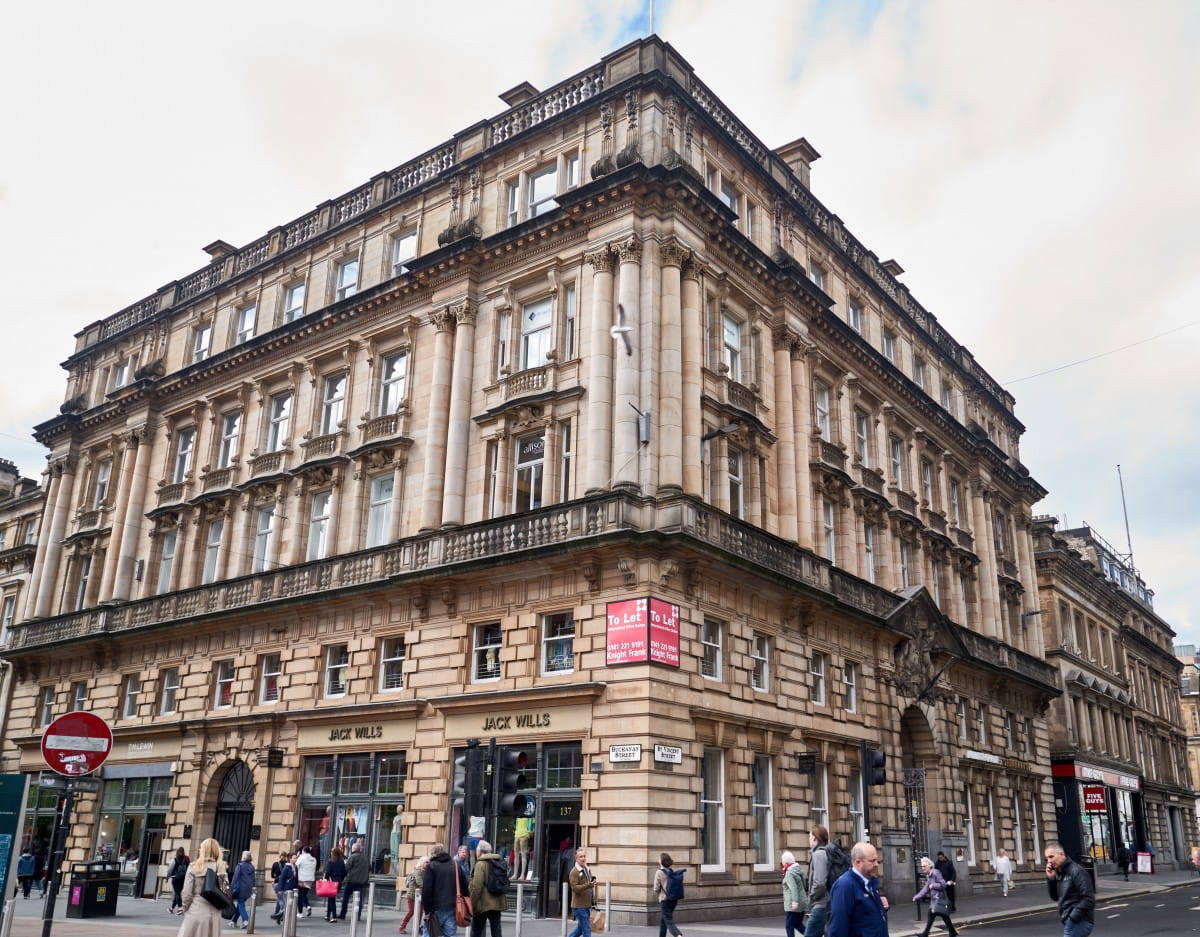 Banking on the palazzo

May 1046
Corner of Buchanan and St Vincent. toshiepix 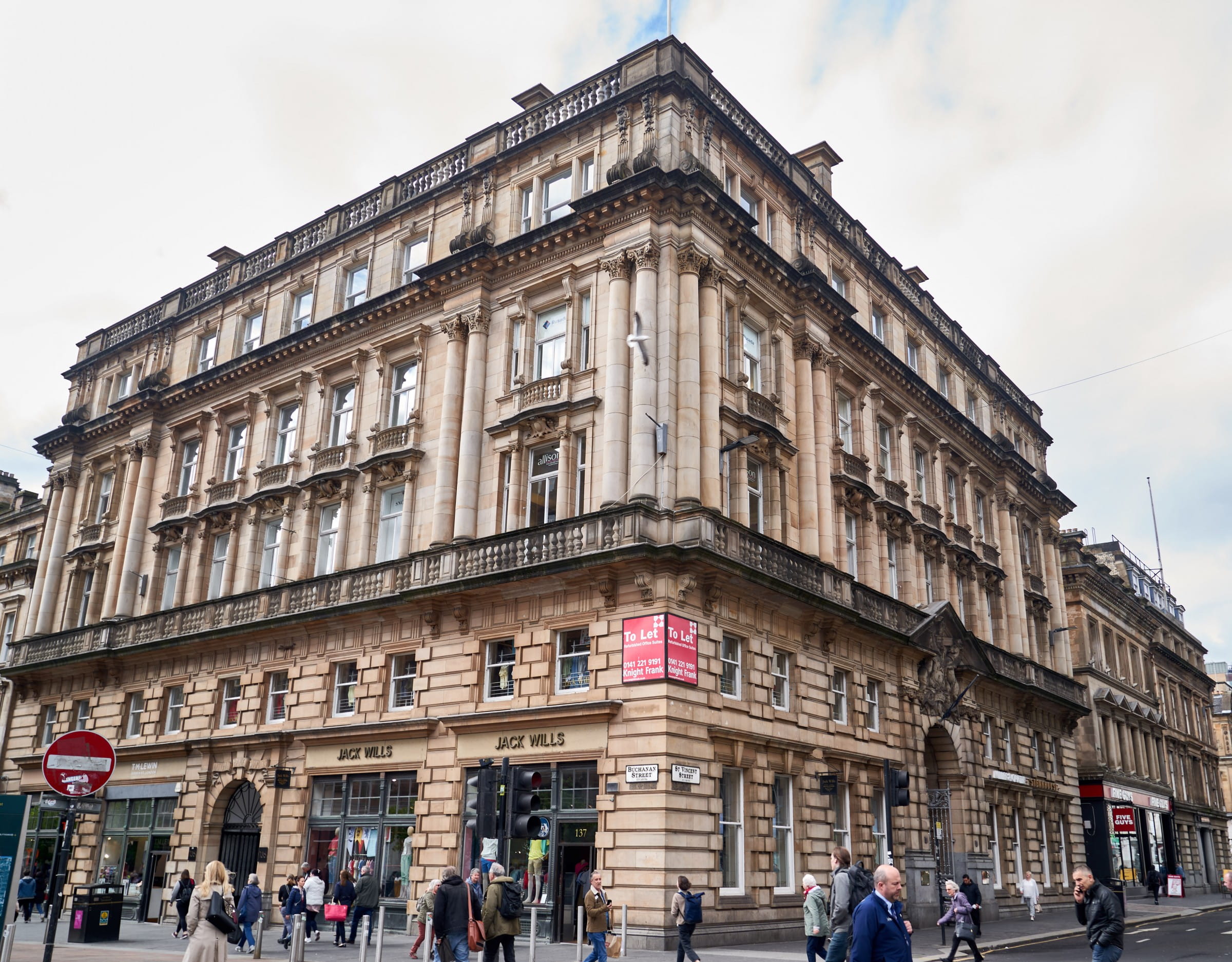 Today it is an upmarket steakhouse on St Vincent Street, with posh shops running down Buchanan Street. Previously it was a much-used Post Office, but this landmark building started life as the National Bank of Scotland, a giant Neo-Baroque palazzo.

It was designed in 1898-1900 by the architect, John More Dick Peddie, who won the competition drawn up by directors of the bank. Seven companies were invited to submit their plans, and a young Charles Rennie Mackintosh was one of those who missed out. In consolation all the architects, except the winning bid, received “an honorarium of 100 guineas.”

The brief was quite explicit. An extract from the minutes of the bank show the directors were astute businessmen, and wanted shops on Buchanan Street to attract decent rental income.

“Should you see your way to accept this invitation, I may mention for your guidance the following main points which my Directors have in view, viz:-- The utilization (sic) of the site to the best possible advantage for the purpose of providing (a) the most complete and approved office accommodation for the Bank's business, including vault and safe accommodation, without any unnecessary waste of valuable ground floor space; and (b) lettable shops and offices of the highest class, thoroughly lighted and ventilated, and provided with all the last modern conveniences and appliances in the matter of hoists and suchlike. Special attention should be given to the question of the rental to be obtained from these portions of the premises which may be let.

“The question of whether the entrance to the Bank should be from Buchanan Street or St Vincent Street, or at the corner, is left to the architects; but it may be mentioned that if shops can be provided, these should be in Buchanan Street.”

After it was finished, so proud were the directors, they hired the architectural photographer, Harry Bedford Lemere, to photograph the interior.

The magnificent square banking hall, lit from above by a glazed coffered ceiling and a large central glass dome, was divided into three bays on each side by pairs of marble Ionic columns. Artificial electric light was supplied by four elegant 'electroliers'.

The Bank, established as a co-partnership in Edinburgh in 1825, opened its first office in Glasgow in 1843 at a time of the huge expansion of the iron industry, and the building of the railways. In 1864 it became the first Scottish bank to open a branch in London

In 2016 the Evening Times reported the former bank had undergone a £1.5million refurbishment to turn it into a restaurant.

It said: “Construction firm Pacific Building had to drill through steel, concrete and sand floors and walls that were up to a metre thick and fortified with metal anti-drilling devices - similar to mediaeval axe heads dating back to the days when the building functioned as a bank."

Many of the interior features from the bank's financial past have been retained, including the huge dome, clock and bank vaults.

The dome has been repainted, cleaned and surrounded by LED lighting. Egg and dart dentelle cornicing surrounding the cupola and other roof lights were restored by a specialist plasterer. Wall panelling in hardwood timber has been preserved and, in places, restored to its former glory by French polishing techniques.

All in all, not a bad place for your steak and chips.