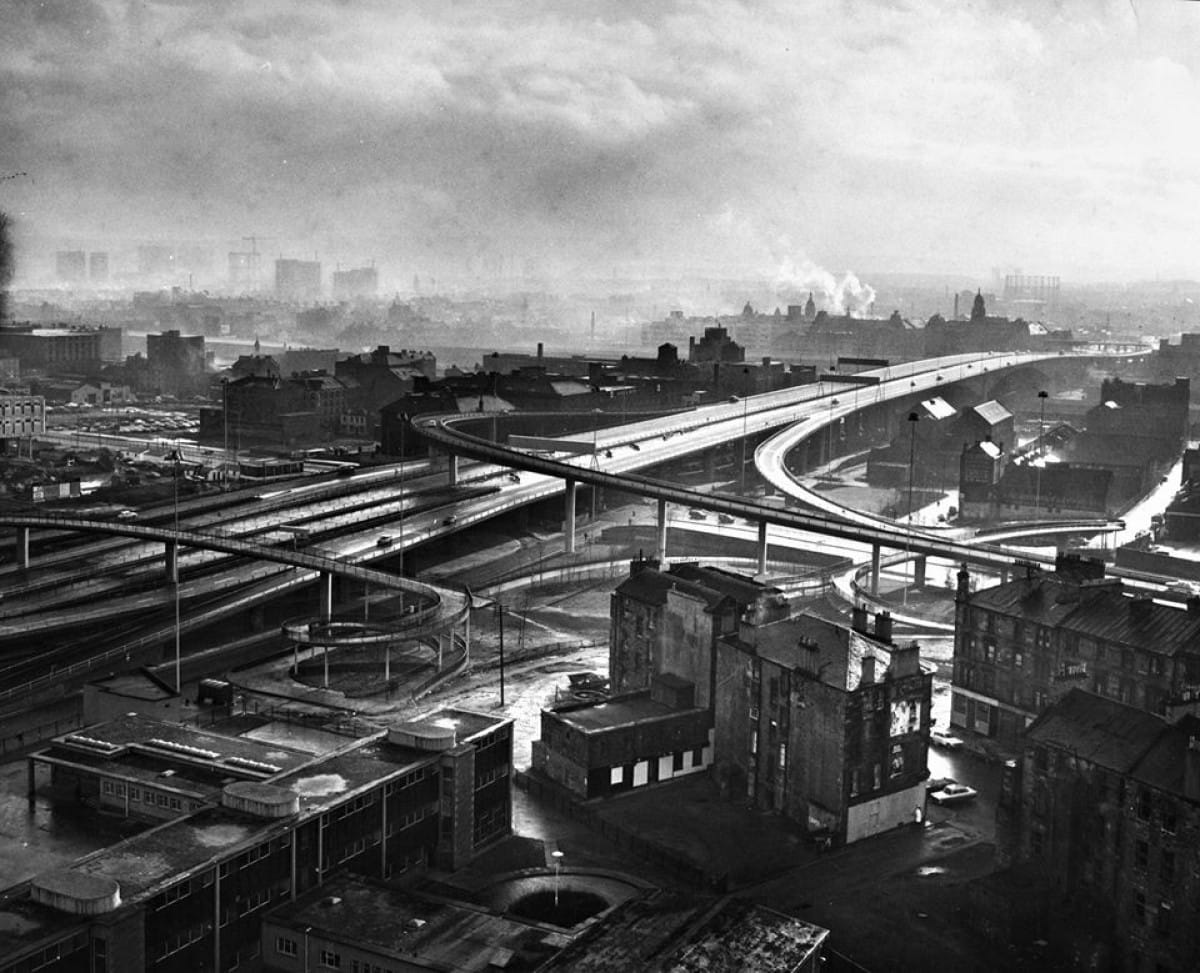 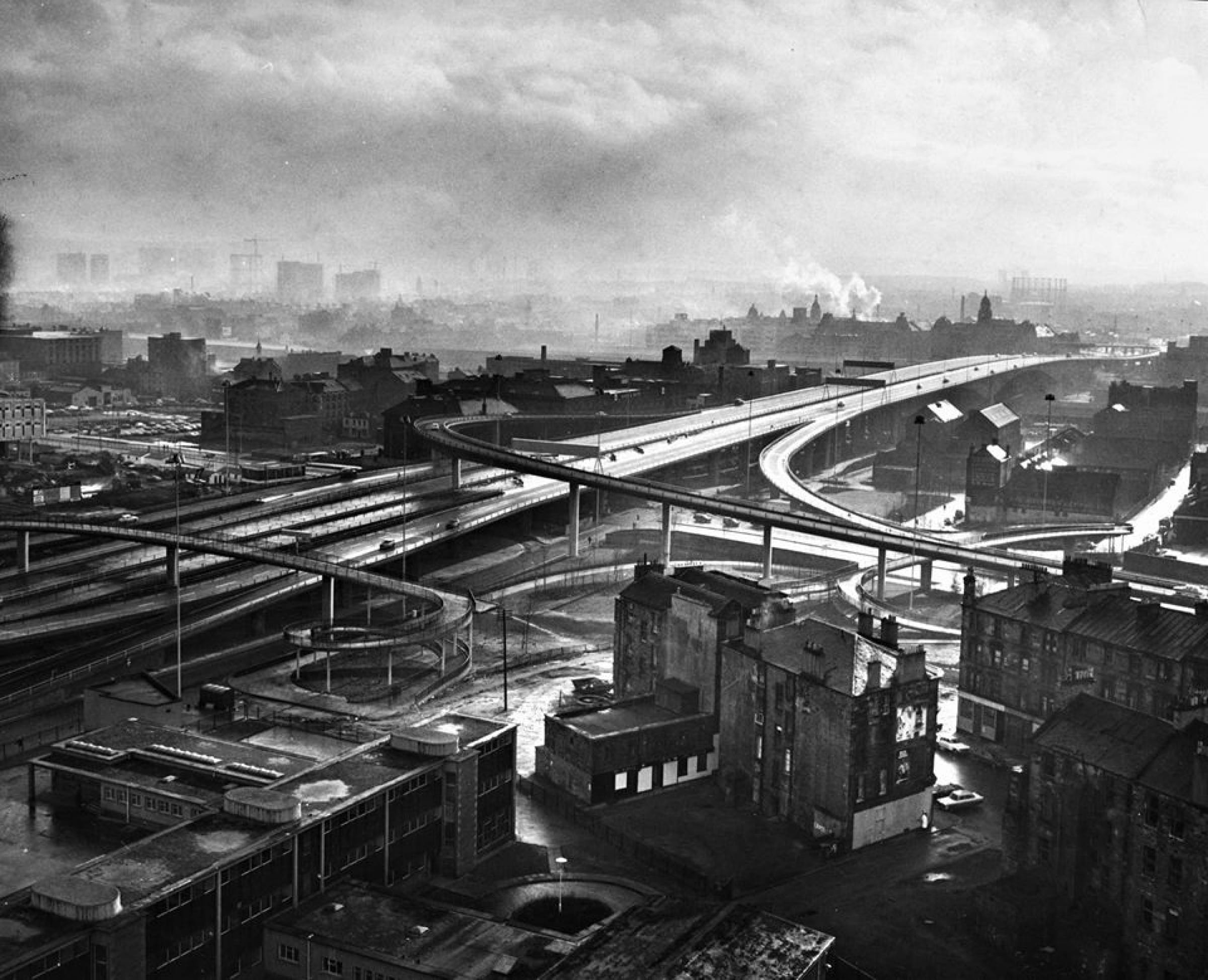 With today marking 50 years since the opening of the Kingston Bridge, I thought I'd reshare this fabulous picture submission from site follower Caroline Corfield.

Caroline says: "I can't recall how I came into possession of this photo, I think it might have had something to do with Paisley Tech's civil engineering department, but then again I might just have found it in a bric-a-brac stall. It's stamped on the back Fitzgerald-Owens News Agency, 68/72 Church Street, Dumbarton."

Now, apart from the spaghetti junction of walkways, roads, and flyovers, and the bird's eye view of St Patrick's Primary School, I love that we are looking down on the eastern end of Argyle Street, and the block containing the Shandon Belles/Buttery restaurant - one of the best and longest-serving eateries in the city.

Although undated, this picture must have been taken just after the bridge opened, as its one-time neighbour, the huge Central Quay HQ of the Daily Record and Sunday Mail has yet to appear.

Even better, if you zoom right in you will spot the laziest lollipop man in Glasgow; leaning against the wall, at the corner with Perth Street, with not a pupil, or a moving vehicle in sight...

Digging a wee bit deeper, I even discovered more about the Fitzgerald-Owens News Agency.

It was set up by Bill Owens, who wrote for both The Scotsman and Daily Record before setting up his own news agency with Sunday Mail colleague Gerry Fitzgerald.

While at the Record Bill, who died in 2017, was responsible for the Pat Roller column, a nightly diary of Glasgow’s dark side made up of news items collected in police stations, hospital casualty departments and mortuaries.

Bill's obituary in The Scotsman reads: “Dumbarton Sheriff Court was one of the busiest in Scotland and Owens was one of the best court reporters, who could boast a shorthand note in excess of 160 words a minute.

“He was so fast at Pitman’s that when the official note takers failed to turn up, the Sheriff Clerk would ask Owens if he would fill in for them.”

Fitzgerald Owens was given the contract by Helensburgh Advertiser owner Craig M Jeffery to supply the whole editorial content and photographs for a new Dunbartonshire weekly, the County Reporter

It launched with an exclusive front page splash about the closure of Denny’s shipyard in Dumbarton with the loss of 2,000 jobs.

The agency later branched out into PR, and counted then-Formula One world champion Jackie Stewart among its clients.

Bill later moved to the Middle East to become editor in chief of The Gulf Daily News, where he claimed he was approached by the FBI and informed that his telephone had been tapped as they believed he was on a terrorist hit list.

The Scotsman obituary also described Owens as “tall, dark and handsome was always immaculately dressed in the image of a reporter out of an American B movie. He smoked cigars, drank modestly and wore a bow tie, a fedora and a trench coat.”

Now, apart from the 'modest' drinking, Bill sounds like my kind of journo...