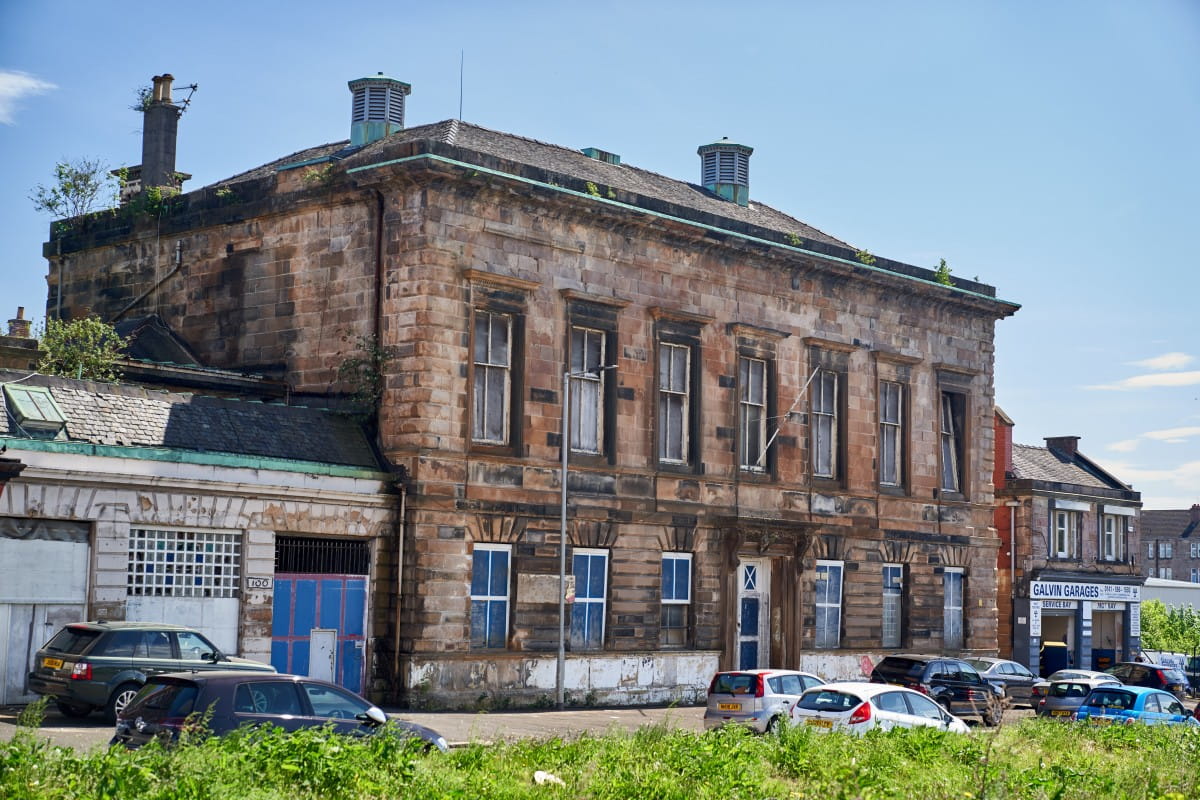 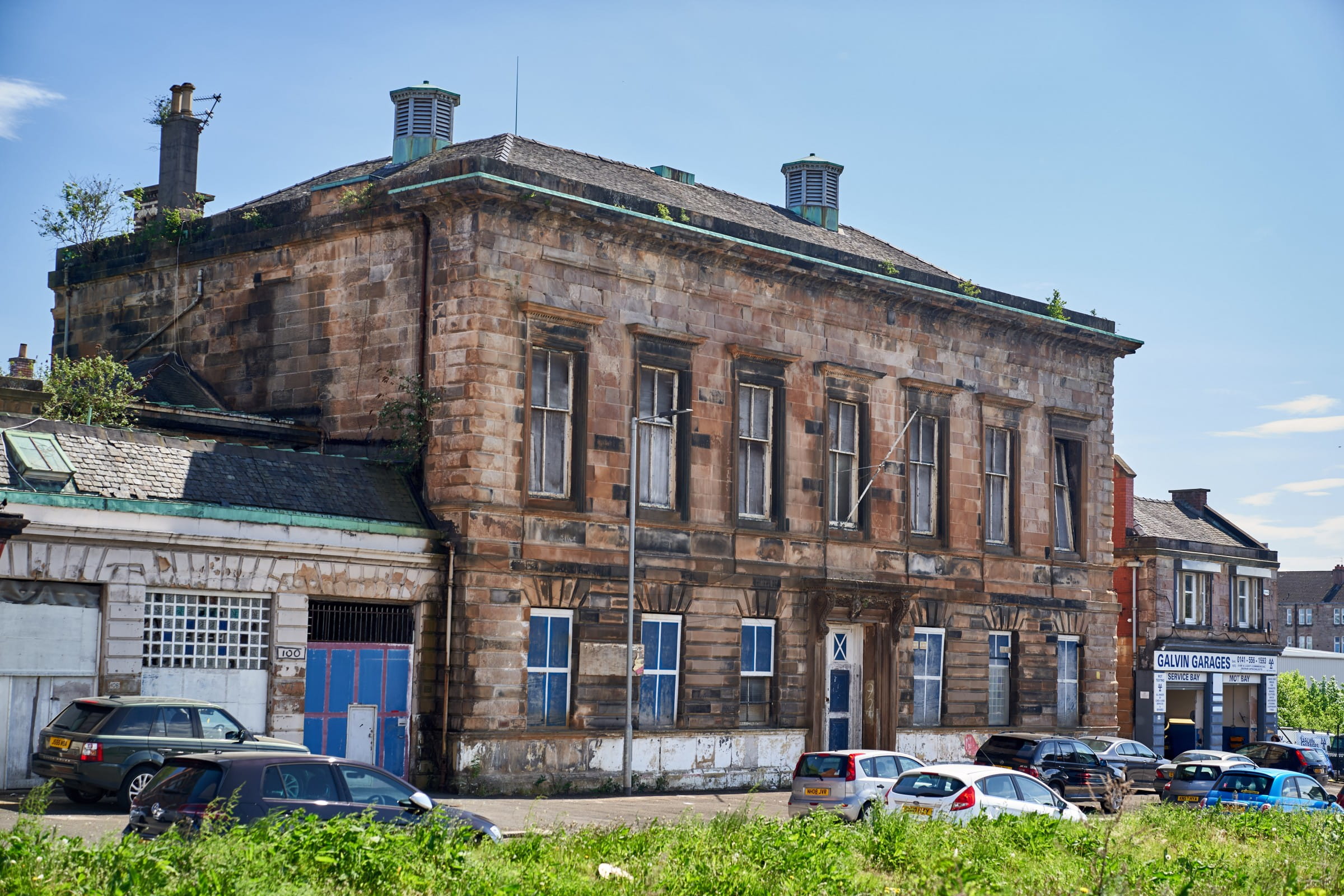 Don't know what the East End has done to deserve such neglect, but this former police station, court, mortuary and "jile" is yet another sorry victim of abandoned decay.

The new police station for the Eastern Division opened on Tobago Street in 1869. The main building contained the court room, mortuary, muster hall and other offices, with 30 cells to the rear.

The single storey wings at either side were occupied by the fire brigade, cleansing and lighting departments. The building continued in use until 1981 when the new headquarters for the Division were opened on London Road.

In November 2004, the Scottish Civic Trust said the building has stood empty and disused for several years and is suffering from water ingress. Three years later the building remained derelict.

In October 2013 the ground floor was in partial use by a taxi firm. The upper floor remain disused.

Glasgow City Council insists its Area Development Framework (ADF) has identified an opportunity to stimulate development interest in the south east corner of Calton, in which the former police station lies, and restore the townscape.

Many colourful characters from Calton's past have been invited guests in the 30-cell accommodation at the rear of the building.

None more so than Charging Thunder.

The movement promised to reunite the living with spirits of their dead forefathers, bring the spirits of the dead to fight on their behalf, make the white colonists leave, and bring peace, prosperity, and unity to native peoples throughout the American plains.

Spooked by the rise of the cult, the US government sent troops onto the reservations, resulting, eventually, in the massacre at Wounded Knee, the death of chief Sitting Bull and the arrest of many of his followers, including young Charging Thunder.

Embarrassed by the bad publicity this engendered, Buffalo Bill, who despite his later reputation, had more understanding and sympathy for native ways than most, offered the US government, and the arrested Indians, a way out.

‘Come to Europe with my Wild West show,’ he said. And many, simply to avoid imprisonment, were happy to follow.

In November 1891, Buffalo Bill and his troupe, among them Kicking Bear – a nephew Crazy Horse, Lone Bull, Iron Tail, Short Bull, No Neck and Charging Thunder, set up camp in Dennistoun, proving a huge hit with the Glasgow public.

Come Hogmanay, Charging Thunder, far from home and surrounded by ‘savages’ (that’s you and me) must have been feeling a bit homesick, as he went out on the lash, returned to the campsite, and assaulted one of the interpreters, George Crager; hitting him over the head with a war club.

Hauled off to Tobago Street Police Station, in the Calton, poor Charging Thunder can’t have been the only one with a sore head when he was hauled before a sheriff on January 12.

Once in the dock, Charging Thunder pled guilty to assault, claiming his lemonade had been spiked with whisky. Sadly, he was unable to identify which Gallowgate pub he had been drinking in. The Sheriff sentenced him to thirty days’ in Barlinnie.

After his release, he re-joined the show but, that’s not where his story ends.

When the troupe returned to the States, sailing from Mavisbank Quay, there were US soldiers on the dock in New York, to re-arrest the Ghost Dancers.

Come 1903, when Buffalo Bill returned to the UK, Charging Thunder was only too happy to accompany him.

When the show arrived in Salford, near Manchester, Charging Thunder spat the dummy, deciding to marry Josephine, one of the American horse trainers in the show, and remain in the UK.

Changing his name to George Edward Williams, he worked for many years at Manchester’s Belle Vue Circus, looking after the elephants.

His favourite heffelump was called Nelly and, according to his family, when Charging Thunder got drunk, he would go to the circus, climb in with the elephants and sleep off his hangover – no doubt dreaming of the plains of his childhood – with Nelly standing guard over him.

Charging Thunder died from pneumonia in 1929 at the age of 52. His body is buried in Gorton Cemetery.

From the Great Plains, to a reservation, to Glasgow, to Barlinnie, to, happy, married life in Manchester (with elephants for mates), that is one hell of a life story!

Wherever Charging Thunder’s spirit now rests, we hope he remembers the days when he made camp in Glasgow.