Feb 219
An advert for the 'Drooko', published in New Zealand's 'Otago Witness' newspaper, in February 1892 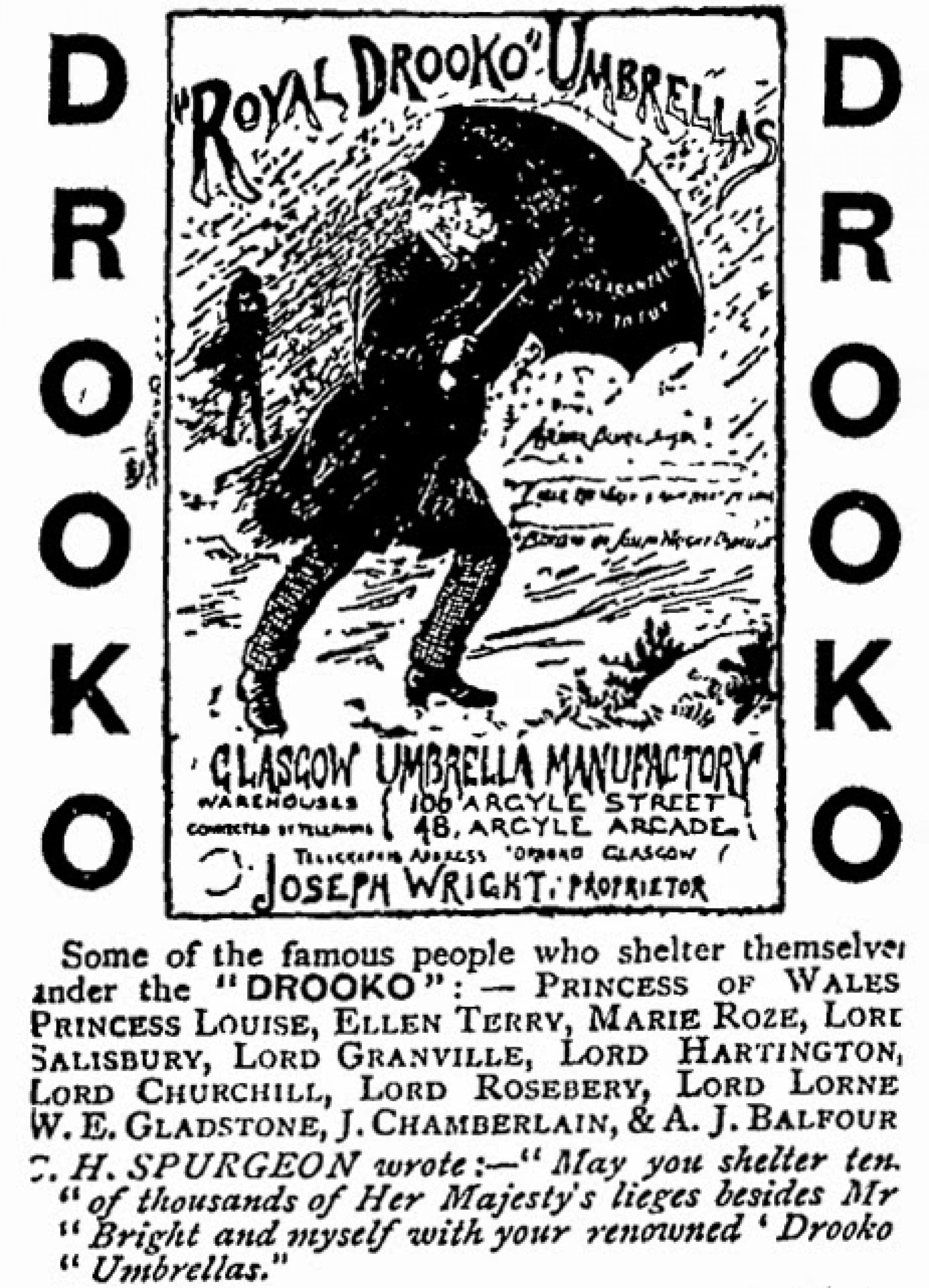 On a dreich day like this, you need a good brolly.

Look no further than a 'Drooko', from manufacturer Joseph Wright's Glasgow Umbrella Factory.

We suspect Joseph had his tongue firmly in his cheek when he adapted the word drookit for his brolly brand. And these were the Rolls-Royce of rainy old Glasgow, made from the finest materials, and often boasting silver or gold fittings. It's no wonder one of his shops was in the upmarket Argyll Arcade. He also had outlets in Argyle Street, Union Street and New City Road, and exported his products right around the world

Ownership of the first umbrella in Scotland is attributed to a Dr Spens of Edinburgh.

In 1872, a Dr John Jamieson, of Glasgow, imported a yellow umbrella from Paris. It seems that this was so unusual that it ‘attracted universal attention’ and he would be followed around on wet days by crowds of people who were amazed by the strange spectacle of his unfurled umbrella.

In 1786, an enterprising individual, John Gardiner, started to manufacture umbrellas in Glasgow, perhaps inspired by the one introduced into the city by Dr Jamieson. It seems, however, that it was constructed from waxed linen, with cane ribs and a massive handle. It was cumbersome and a load to carry, and was soon overtaken by a lighter version made in Manchester.

Joseph Wright, who was a Glasgow lay preacher, philanthropist and writer, manufactured the ‘Drooko’ umbrella in Glasgow between 1885 and 1912.

Wright published many of his own works and was able to include long advertisements for the ‘Drooko’ in his books. So renowned were his umbrellas that a verse was dedicated to them:

‘I walk the world a raintight fella
Beneath the Joseph Wright umbrella.’

Wee mix-up with the years?1872 then 1786! Might want to correct this. Fascinating little article, though. 👍