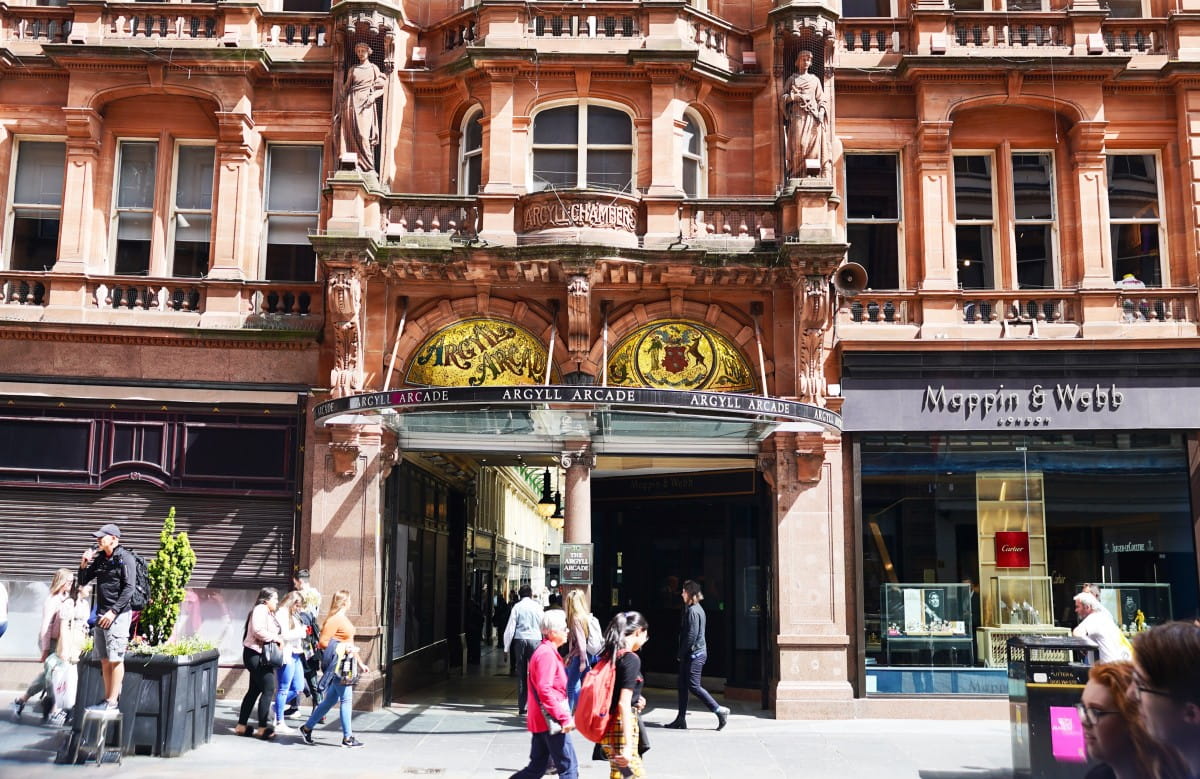 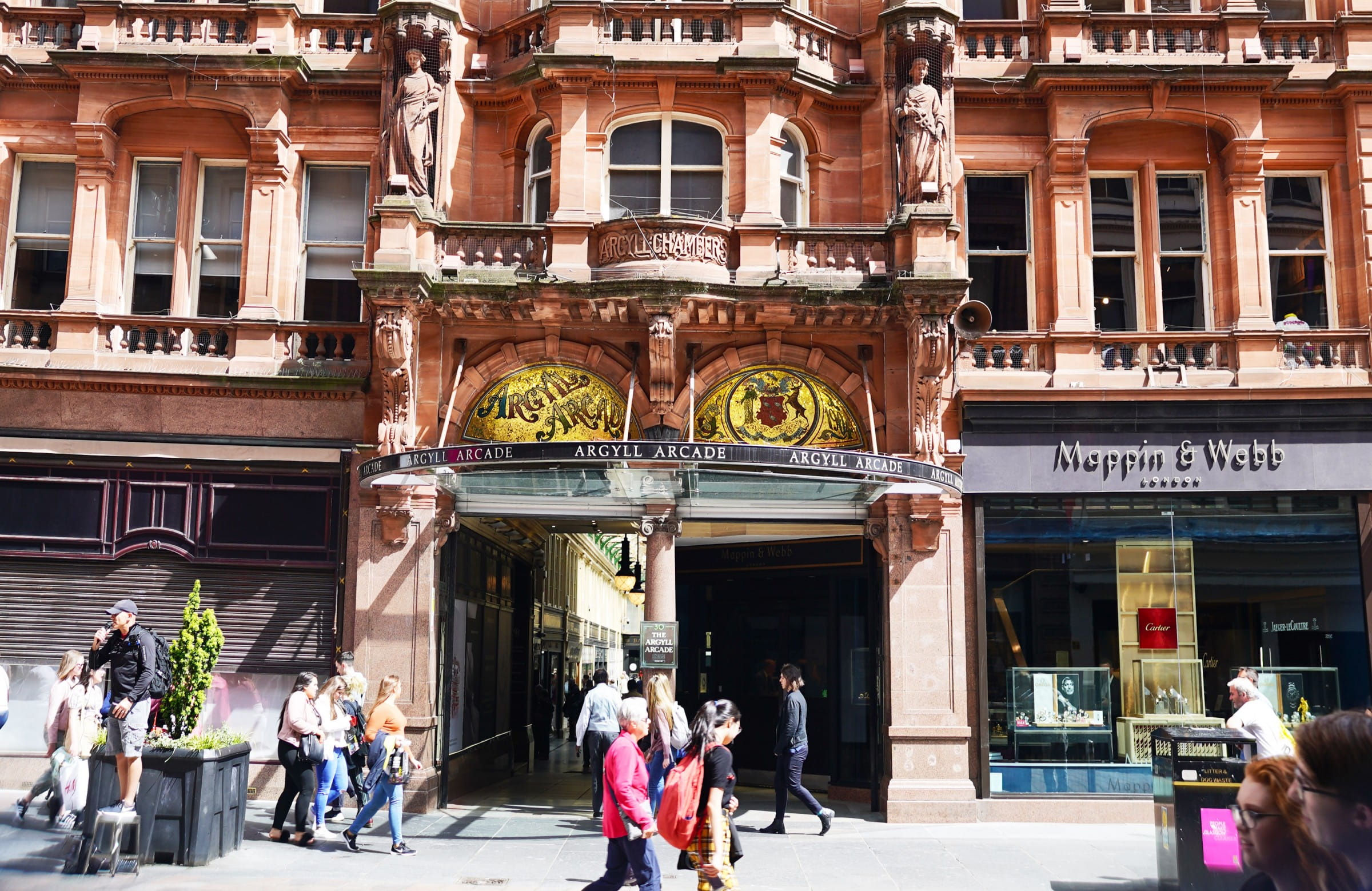 You may know this as one of the entrances to the Argyll Arcade, but in fact, its is actually John Reid's front door. The windows on either side, groaning with high-end jewelled watches and timepieces, were his front rooms.

John Reid was a fancy goods dealer, who, inspired by European arcades, decided to start one of his own. He moved his family upstairs and set up the Argyll Arcade on the ground floor and continued it beyond the rear of his home and round to the right, through a tenement building that he owned on Argyle Street, hence the angled arcade.

Renowned for jewellery and timepieces, the Arcade was also the location for many years of the Clyde Model Dockyard, a Mecca for modellers and young boys with dreams.

The Arcade was opened in 1828, having been built on the site of Reid's timber export business which had suffered fire damage the previous year. The building was designed by John Baird.

By the 1840s there were 63 shops ranged along the glass-roofed L-shaped thoroughfare, selling a wide variety of luxury goods. The entrance was remodelled in 1962, and the arcade is today predominantly occupied by jewellers' shops.

At the time it was built the arcade was seen as a risky venture as Buchanan Street was then little more than a country road at the outskirts of the city's then west end.

Luckily for Reid the gamble paid off and the success of the Argyll Arcade was the main driving force behind the expansion of Buchanan Street into the bustling shopping area that it is today.

So the arcade provides a covered haven for shoppers. It also provides LG’s Mr Wilson with the opporchancity to tell one of his all-time favourite tales; that of the Argyll Arcade gallop.

The 15th King's Own Hussars, who had served with distinction at Waterloo in 1815, rather blotted their copybook with their actions in Manchester in 1819, when they charged a peaceful demonstration at St Peter's Field, with the day becoming known as the Peterloo Massacre.

As calls for democratic reforms - one man, one vote - grew louder, in 1838 the Hussars were sent north to Glasgow, then a hotbed of radical protest. They were billeted in the cavalry barracks, in Eglinton Street.

As Hussars, these were no common soldiers, most of the officers were the sons of wealthy English landed families, with their fathers, paying hefty sums to buy their commissions. Look at the panels on the plinth of our Duke of Wellington statue and you'll see a few of the bold fellows cast in bronze.

Glasgow didn't hold much excitement for these guys, and they soon got out of hand. While one Hussar was fined for organising dog fights, Lieutenant Richard Knox was to do much worse.

One day, for bet, he set out to gallop through the city's Argyll Arcade - then the city's newest and most upmarket shopping destination.

The builder and owner of the Arcade, John Robertson Reid, who then lived 'above the shop' on Buchanan Street, came rattling down the stairs on hearing the commotion, to find his customers in a state of terror.

He was having none of it, and demanded an apology from the Lieutenant but never received one. So he summonsed Lieutenant Knox before the magistrate in Glasgow Police Office where he was severely reprimanded and fined £5, the highest sum that could be imposed at that time under the Police Act.

The Lieutenant, a wealthy man, paid the fine and left the court laughing with his Hussar cronies.

Reid was furious at them, so he enlisted the help of his friend Peter McKenzie, the publisher and editor of the radical weekly journal, the Loyal Reformers' Gazette.

McKenzie published a blistering attack upon the Hussars suggesting that sending them to a foreign land would be the suitable punishment for officers who had treated Glasgow's citizens with such contempt.

The 15th Hussars were in shock and horror when they discovered a full regimental inquiry was to be set up and held in Glasgow's George Hotel in October 1838.

Lieutenant Knox and his cronies were found guilty as charged (pun intended) and he and his regiment were immediately posted to Madras, in India.

Somehow, I don't 'Argyll Arcade, 1838' ever appeared in their list of battle honours.