One Week in April 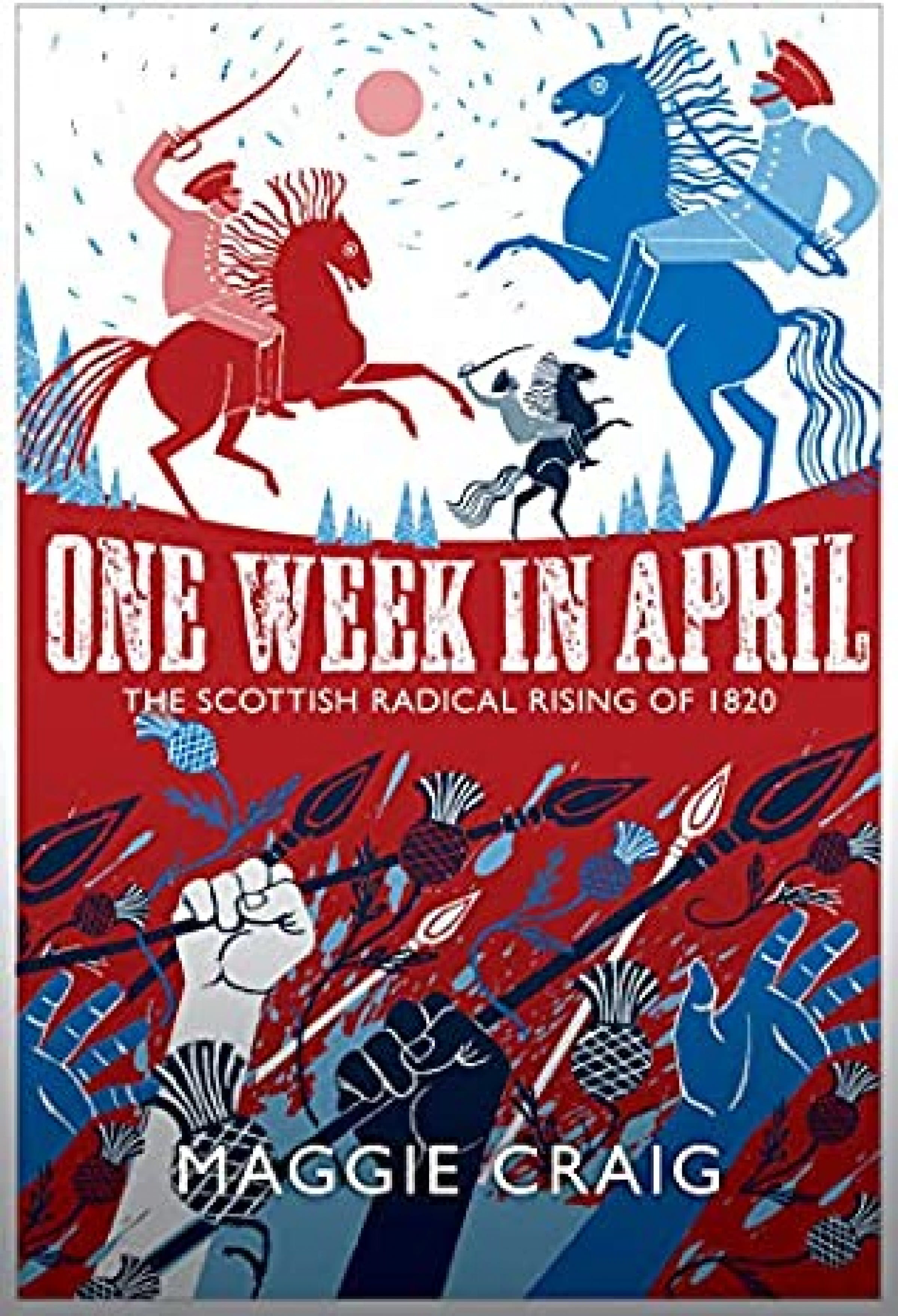 Another day, another book giveaway.

While this week marks the 700th anniversary of the Declaration of Arbroath, it also marks the bicentenary of a far darker period in our history, the Radical Rising of 1820.

In April that year, in the aftermath of the economic crash that followed the long years of the Napoleonic Wars, a series of dramatic events exploded around Glasgow, central Scotland and Ayrshire. Revolution was in the air.

Demanding political reform and better living and working conditions, some 60,000 weavers and other workers went on strike. Radicals marched under a flag emblazoned with the words 'Scotland Free, or Scotland a Desart' [sic], whilst others armed themselves with homemade pikes and set off for the Carron Ironworks seeking cannons.

When this small band - it could hardly be called an army, there were only about 30 men and boys - were intercepted by Government soldiers and cavalry, a bloody skirmish took place at Bonnymuir, near Falkirk.

A military curfew was imposed on Glasgow and Paisley.

Aiming to free Radical prisoners, a crowd in Greenock was attacked by the Port Glasgow Militia. Among the dead were a 65-year-old woman and a young boy.

In the vicious recriminations that followed, three Radical leaders, John Baird, Andrew Hardie and James Wilson, were hanged and beheaded, while 19 others were transported to Australia.

Maggie Craig's new book, 'One Week in April: The Scottish Radical Rising of 1820' (£20, Birlinn Ltd) brings fresh understanding and insight to these pivotal events in Scottish social and political history, and, the story, with its Government spies, informers, brave men and women, and selfless champions of democracy, reads almost like a modern political thriller.

Thanks to our friends at Birlinn, I have five copies of the book to give away. Just leave a comment below and, come Saturday, I'll pick the winners' names from my Phrygian cap - the ancient Greek symbol of freedom and democracy the Radicals often carried at the head of their protest meetings.

Alternatively, you can order your own copy here: https://birlinn.co.uk/product/one-week-in-april/

Sounds really interesting, I didn’t know about this. Every day is a school day with you Norry. You do an amazing job for your Lost Glasgow family! Very much appreciated

My great, great, great, great, great grandfather was innocently involved in this ordeal! His name was Robert Gardner. He owned a grocery store and tavern in Kilsyth called the Black Bull Inn located two or three doors down from the cross of Kilsyth. Robert had recently won a lawsuit against the town factor and the factor gave Robert's name to the government soldiers as being a conspirator in the uprising. Robert was taken from his business and imprisoned in Stirling Castle for nine weeks (that's how long it took the judges to arrive). Robert was released when no one appeared to testify against him.

Really interested in this as currently trying to research the Paisley and the Glasgow weavers and the involvement of the military who were based between them on the outskirts of Paisley itself around the same dates as the book. We are a small charity and if unsuccessful will need to buy the book to fill in any gaps - when we are finished we will be putting up a free display in Paisley itself

Due to a neurological condition, I can’t read books, just small snippets of info at a time. I wish I could! But I would love to give this to a relative who is self-isolating due to COPD.

As with much of Scottish history, events like these are ignored in even Scottish education. The small excerpt I have seen of this text promises an interesting window into our rich history.

I have only recently heard how my village of Duntocher was involved in the radical uprising and would love to find out more .

Yet another area of our history that was mysteriously neglected from our education. History at school was really very selective.

I live in Condorrat where John Baird a weaver was brought up. He was executed at Stirling in 1820 as a revolutionary. I’d be very interested to read about the times when he lived and the causes he fought for.

Although born in Bellshill(don't hold that against me, it got worse), I grew up on the Black Isle(again, please), now in Glasgow(Yyaasss!); I am blown away with the local history I am learning. Thank you for continuing to bring it to us.
Stay safe, keep well and be strong.

All the historical ‘events’ in Scotland’s history have a common theme; oppression. Be it the highland clearances, the riots in George Square, the mass migration of Irish and many more, ordinary people suffered for the vanity and greed of others.

This is another dark part of Scotland's history that I was blisfuly unaware of. If I were to win one, I would be less ignorant of it!

Please can I be a winner! This sounds so interesting

What a great book. I had no idea there had been an uprising in 1820. I have so much to learn about the history of my own country

This sounds like a fantastic book!
Please don’t consider me for a free copy, I’m happy to buy one!
Keep up the good work!
Alan